Collectible ''Out Of Print Compact Discs'' 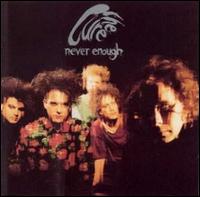 Taken directly from the Mixed Up album, "Never Enough" in the long version included here is an absolute monster of a track. Smith's coruscating, vicious funk guitar and the shuffling rhythm and loops from the rest of the band make an impressive riposte to the Madchester/baggy era of late-'80s Britain. A shortened version for radio play appears here as a well, but it's nowhere as gripping as the full take. A remix that didn't appear on Mixed Up ends up here as well: the "Milk" mix of "Let's Go to Bed," retaining the edgy, humorous bop of the track while mixing it with new keyboard and rhythm lines, resulting in a just moody enough delight. Only one wholly original track appears here, but it's another brilliant rarity from a band that constantly produces them, "Harold and Joe." With a sprightly keyboard line from Perry Bamonte and a clever, dance-touched rhythm underscoring Smith's easy performance of a ruminative, ennui-laden lyric, it's a gentle treasure, topped off with Smith's sudden whistling solo.